While in Chicago last week, Uncle Carl treated us to something very special: a night at the circus! I don't think Leah quite knew what to expect, aside from elephants which we programmed into her. We arrived early for the pre-show in which you can get really close to the animals and performers. There was a lady who did a hula-hoop act, and her finale was to hula 16 hoops at once--that was pretty cool. We saw the poodles dance on their hind legs and do other tricks, acrobatics up close, and watched while Asia the elephant painted a picture by holding a paintbrush in her trunk. We entered to win the painting.

Well, the show was awesome. Leah was a little sleepy at first so it took her awhile to get into it, but eventually she was clapping and announcing whenever a new animal came out onto the stage (at least, when she wasn't concernedly plugging her ears because of all the noise!). During the show they announced the winner of the Pachyderm Painting, and it was our very own Leah!!!! This is the painting, complete with a frame from Grandma. What a treasure! 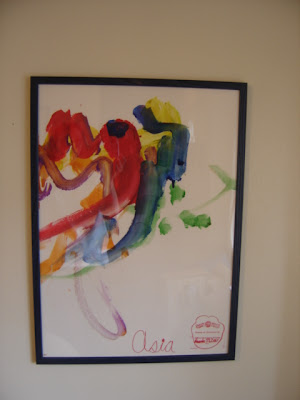 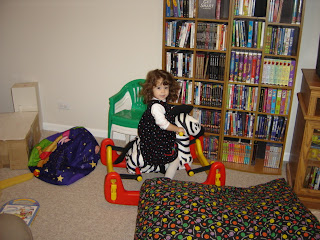 Leah is learning so much. She is really good at relating things that she has experienced (but with some coaching). On her own, she has identified that the circus was noisy and fun and that the elephants danced. Although she can't identify a circle from a square or triangle, she did voluntarily identify the set as "shapes" which was a big surprise to me! She is learning her colors, she sings along to the alphabet song, and can count to ten all by herself. She knows where baby brother is and calls him Sammy, gives my belly a kiss, and can re-create the hearbeat sound we heard at the doctor's office. She knows a boy from a girl since she's watched me change diapers. She is learning to use words instead of whines, much at my encouragement since I have zero tolerance or patience for whining. She can make two and three word sentances including "Baby sad," "Big truck," "Daddy's book," "I like bubbles," and "I love you". She knows how to ask for help, can answer when asked what her name is (E-ah), and can ask for things she wants such as food, a binky, to go swimming, or for a toy. She's recently decided she doesn't like having dirty hands and insists I clean them for her mid-meal. Leah can identify people in pictures, and even said that Uncle Carl, who wears a beard, was Jesus. She liberally gives smiles, hugs, and kisses. She is the queen of imitating. She's recently decided to start snuggling again. How we love our little girl. I'm so glad we didn't leave her at a gas station in Laramie, Wyoming!
Posted by Jenny at 9:31 AM 2 comments:

The Lost may be Found!

Perhaps my last post was premature, because Ophie may not be gone at all! I desperately and without hope called the Conoco in Laramie, Wyoming where Ophie was suspected to have been last seen. The attendant (unforgettable with a nose-ring, 1cm diameter earrings, and a tongue-ring) remembered us and kept Ophie safely under the counter should we return! He said he is going to mail her to us, which is quite believable considering there is a post-office station inside that very Conoco! Hooray! This emotional pregnant woman cried tears of joy! Leah has asked for Ophie in the meantime, and I usually just changed the subject or replaced Ophie with another stuffed animal, but on the one occasion that I told her Ophie was "all gone" and lost, I think we were both near tears! She saw the picture of Ophie on the post, and very dejectedly remarked "Ophie, lost!" and kissed the screen. I am very hopeful now that we may be able to reunite the two friends. I will undoubtedly keep you updated as more breaking news develops.
Posted by Jenny at 9:24 AM 1 comment: 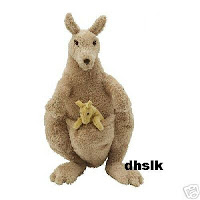 We've kept track of her and her precious Joey for almost a year. She's traveled with us to Illinois, Washington, Texas, and all places in between. She's gone through the washing machine many a-time, she has been retreived from multiple lost-and-founds, and she has absorbed pancake syrup, vomit, spaghetti sauce, orange juice, tears, and countless other substances, may they remain unknown to us. She was greatly loved, her fabric becoming threadbare and her stuffing lumpy. Leah has enjoyed parenting her favorite kangaroo, diapering her, feeding her, giving her a bath, brushing her teeth. Oh, how we will miss our dear Ophie. May the finder at that gas station in Wyoming enjoy her soft lumpiness for years to come.


I think I was perhaps more attached to Ophie than anyone else, for I actually shed tears at the realization that we left her behind, and Leah has yet to ask for Ophie (but I am also 7 months pregnant...), and I continue to mourn. Ikea unfortunately no longer sells the Klappar stuffed animal series, and the only one on ebay is somewhat overpriced...should that matter? We are prepared to present a stuffed Nemo to Leah on her birthday...but can that really take the place? Here is our family picture from our vacation, the last picture of our whole family, before Ophie was lost. May she rest in peace. *sniffle* 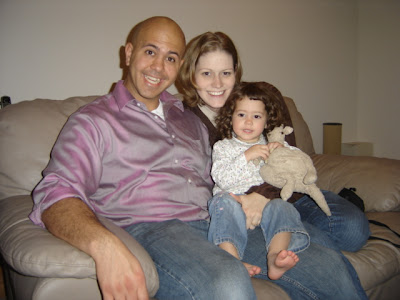 It's been a month since our trip to the Zoo, but Leah still remembers what we saw and still talks about the animals all the time. We're looking forward to taking her to the circus next week and seeing more elephants!

Here's Leah singing at the dinner table. Can you decipher what the words are? Because we sure can't...

Labels: A Day in the Life, Videos

Leah is quite good at imitating. She is very perceptive. Things that we say and that she hears, although she may not indicate that she's learned it, sometimes re-surface in her memory much later.

For example, she really likes Finding Nemo. She knows the chanting from the fish-tank initiation scene. Little did we know that she has the entire scene committed to memory. One day I did the chant and she responded with "Sharkbate, Ha Ha!" which is the next line! We never taught her that! She also likes to speak "whale" and gets a good laugh when we speak whale back. It took us a few times to figure out what she was saying, but then it was like a light-bulb turning on, and she was thrilled! She is always anxious to watch her favorite movies and excitedly waits to sing and dance along.

She can count to 10 but usually skips 5 and can do the alphabet in pieces with 9 coming after H. She's learning the song and I think that has helped. Somehow she picked up "No Way!" and says it all the time. She also "prays" while we are blessing the food, and we hear her saying all sorts of words that are just identifying the things around us, "Mommy, Daddy, water, Ophie, Dinosaur" etc. She encourages herself while she works a wooden puzzle by saying "turn it, turn it, good girl" and says "careful" as she goes down the stairs by herself.

Yesterday, Leah was "coloring" while I was reading and after a while I looked up to see what she was doing. She had torn a page out of her coloring book and was ripping it to shreds while saying "Sing songs, ...treats". After a puzzled moment, we realized she was recreating a scene from Mary Poppins where Mr. Banks tears up a peice of paper in the fireplace while grumbling about what the children wanted in their nanny. See for yourself:

What a copycat! (We may need to get some more coloring books)