The point of no return

If only she had known the true significance of my offer, she might not have so willingly collected all of her binkies and ceremoniously thrown them all away in exchange for this balloon. Leah was very excited to finally get to play with this balloon that has been hiding in the bathroom for several days, but when bedtime came around...not so much. (can you see how jealous the baby is of the mysterious new entity in the room?) 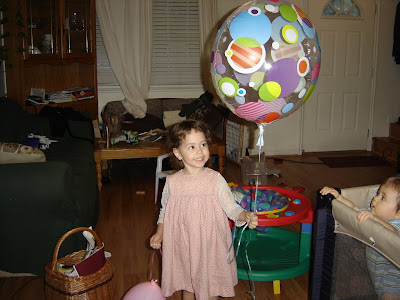 Of course, I waited until after our traditional Sunday nap. After the bathroom routine (where she is fully potty trained and finally starting to let me brush her teeth), we adjourned to the bedroom for story time, and she immediately recognized that her binky was in the garbage can, a permanent resting place. Oh, the tears and decibels of sorrow! I continued our normal routine, reading normally despite the wailing and gnashing of teeth, had a bedtime prayer, and I blew out the light. I locked the door behind me.

After 15 minutes of feeding the baby and breathing deeply, my guilt had truly gotten the better of me. From behind her door, I heard such things as "I don't want a balloon!" and "I don't want to be a big girl!" How pitiful! Did she think she was being punished? Would this be the end of peaceful nights and afternoon naps? Will she resort to thumb-sucking? Would she ever trust me again? After consulting with Chris and receiving some encouragement not to give in, I went back in to Leah's room.

I comforted her and assured her that she was not being punished and I was not mad at her. I told her that it is hard to give up something we love and it is okay to be sad. I'm not sure how much of my pep talk was understood, but after signing and rocking quietly for 15 minutes, the thunder died down. I told her stories and we talked about the upcoming holidays. She is excited to be Jesse (from Toy Story 2) for Halloween, to have a birthday, and to "be nice to Daniel" after we go on an airplane at Christmastime. We looked out the window and talked about the seasons and how the leaves would soon turn colors, fall off and dry up. "We better wear shoes," she decided, so that we can crunch around on the leaves and not have our feet get cold. She was a little sweetheart and I could tell that she had already forgiven me.

Then I laid in bed with her for a few minutes hoping she would fall asleep. When it was finally time for me to leave, she was still awake, but I could tell that she had come to terms with this new development, at least for the time being. I'm hoping that in the morning, she will know to be proud of herself for going a night without a binky. I'm sure she'll parrot back to me that she got a balloon and we said bye-bye to her binky, and then she cried a lot.

I'm beginning to understand why so many people call the two's terrible: we expect so much of such a small creature. Since she turned two not even a year ago, Leah got a baby brother, transitioned from a crib to a big-girl bed and from diapers to panties. She talks in complete sentences but doesn't quite know enough words or have the emotional capacity to understand and fully communicate. It's no wonder they have a hard time.

Here's to my super-daughter and the opportunity to grow up a little. How I love my little girl!
Posted by Jenny at 10:17 PM 4 comments:

I have started practicing french braids on Leah's hair when she's freshly out of the bathtub and fully entertained by a movie. I did it a couple weeks ago for church, but it was pretty loose. Last night was a good opportunity to practice again. I think I'm getting better--I just can't get them very tight or even. Now, if only she'd leave them in for more than 3 minutes! 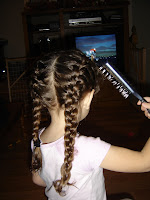 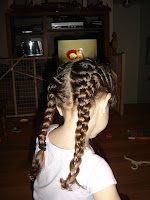 Labels: Pictures, Sugar and Spice and Everything Nice

Leah likes to play mom to anything and everything. She feeds her dolls and toys a toy bottle, then rocks them to sleep in a blanket. "Shhh mom, baby frog is sleeping!" I've even seen her put Buzz Lightyear under her shirt to nurse. (embarrassed grin)

In the rare event that mom wakes up before the baby, I pump a bottle for him. Leah was excitedly willing to be the one to feed a real baby a real bottle!

I think these kids like each other, what do you think? 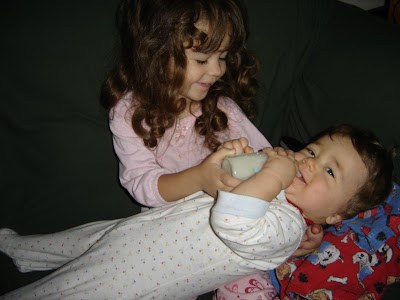 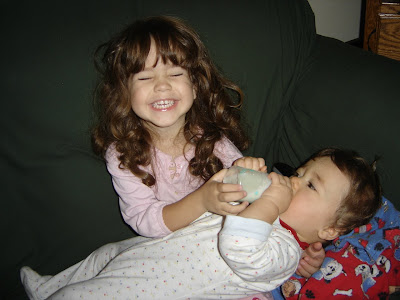 Labels: A Day in the Life, Imagination, Pictures, Siblings 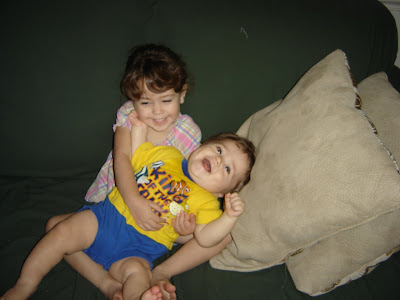 The latest installment of Leah-speak.

puger (computer)
scoofdiver (screwdriver)
scratch-back (back scratch)
Mom, I don't have any dressed (Mom, I'm not dressed)
I'm hungry some for luntz (I'm hungry for some breakfast, lunch, or dinner--this is usually the first thing I hear in the morning)
Mom, how was my nap? (Mom, ask me how my nap was--it was good)
Today Leah opened up an empty notebook and started reading to me. She said:
"Once upon a time there was a little girl named Leah. Loooong hair. And Samuel was crying and crawling."
Posted by Jenny at 12:29 AM 1 comment: