Leah doesn't really understand the concept of consequences. In the two hotels we stayed in last week, her favorite amenity in each was the closet door, which she could close on herself and which provided a terrific bite-sized place to hide. However, just every about closet door provides a method for pinching fingers somehow. We experienced pinched fingers over and over and over again. You'd think that sliding the door on fingers or getting them pinched in the hinges would compel her to no longer play with the closet door, but in reality this consequence did not in the least deter our little one from continuing said activity. It is obviously an immediate and guaranteed consequence for a specific activity, and she continually brings it upon herself. Aren't kids supposed to learn that if they touch the hot stove and get burned they never try it again? I really do believe that if my little Leah were to ever touch the hot stove, she would probably still do it again! (I hope never to find out.)

Here's another example. The time out. When I ask her to do something and she simply ignores me, I warn her of a coming time out. I count (very slowly, too) one, two, three. On occasion, she jumps into action at two and does what I've asked her to do or cease doing (stop throwing things in the toilet, come here, don't hit, etc). But more often than not, she earns herself a timeout, which right now consists of being strong-armed on my lap for about a minute and a half. She thinks this activity is miserable, but continues to earn herself time-outs on a regular basis.

Other behaviors such as touching the computer or stereo or putting things in a socket earn her a slap on the hand, which makes her cry. So why does she continue to do it again and again and again? Didn't she learn?

When the misbehavior is a dangerous one, such as running out into the street, there is no grace period and I run after her and give her an on-the-spot spanking. Yes, I spank my child. (She wears a diaper, okay!) Sometimes she cries, but sometimes she laughs! Then I put her back down and she pulls free of my tight hand-hold and runs straight back into the street. I don't understand.

Lately she's been really clumsy, standing on things and falling off of them and biting her lip on the way down. This has happened twice in two days. Once she gets over the trauma aspect of an actual blood injury, she is usually really cuddly and pouty, which is really sweet. But it still doesn't explain why she continues to do the very same activities that get her hurt or in trouble!

Cuddly, pouty Leah after she bit her lip: 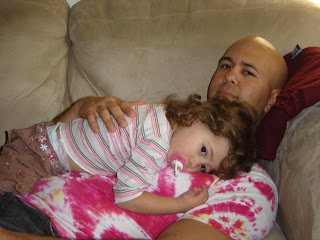 So this makes me wonder: If she doesn't understand the consequences of misbehaving or getting hurt, does she understand the consequences of positive behavior? She gets candy when she tells me she went poopy and when she sits on the potty. Does she get it? She gets cheering and a round of applause and attention when she succeeds at an activity or does something cute. Does she get it? Am I to conclude that since she does cute things more often than mischeivous things she already recognizes the value of positive attention and prefers it to the negative consequences of bad behavior?

I just want to add that when she smears food on her face and on the floor, I take away her option to feed herself by taking her fork away and feeding her myself. She gets that. But when we're in a store or something and she runs amuck and pulls things off shelves she can choose to either stay by my side, holding my hand, or be carried or ride in a stroller. She doesn't seem to get that one. I don't understand!