I guess sibling rivalry knows no age limit. Normally these two tend to like each other, Leah is a little mother and takes care of the baby, prentending to feed him a bottle, fetching diapers, and plugging in his binky whenever he looses it. Samuel is always ready to give a smile to his big sister who is quite the entertainer.
But...Leah accidentally stepped on the baby. She is just such a busy bee, and I guess he blends in with the carpet? It's okay, though, he got her back when she got too close and he got a hold of her hair. She doesn't seem to understand this phenomenon.
Actually, come to think of it Samuel punishes himself--this afternoon during tummy time, he managed to gag himself when he got his entire fist into his mouth. Poor guy.
In this series of pictures, Leah was getting down on Samuel's level probably to see what was so exciting about laying on your tummy. Then she proceeded to give him a back treatment with a wire wisk. 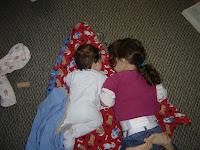 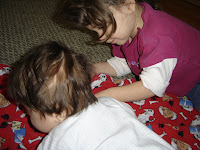 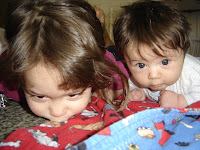 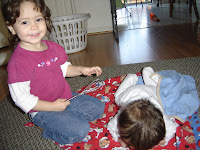 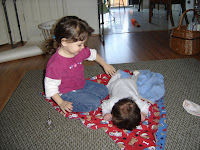 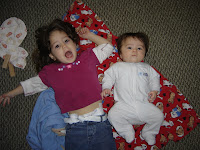 That is so cute! I want to see more pictures of the two of them and of Samuel: I can't believe how much hair he has!! He looks like he's three years old, just because of all that hair!

As for the stepping on the baby thing: Did Leah seem sorry when Samuel cried? Or did she not even notice? It doesn't sound like it was on purpose.

DALIA SAYS: oh my gosh your babies are so adorable! i love the pic where both of them are laid on their backs and looking at the camera...hey! hows potty training going? any luck with it????